In 1818 Mr Stephenson and Mr Blake formed a business that continues today as Stephenson Blake. The company was one of the largest and most famous typefounders in the world, producing the lead type that printed fact and fiction for almost two centuries.

The property comprised around one and a half acres of land in single ownership and containing a number of buildings including a remarkable range of Victorian industrial buildings designed to carry the extreme weights necessitated by the lead casting processes. A private road ran through the centre of the site which originally served another range of buildings that had been demolished due to increasing business rates and the shrinking of the business needs over the years.

Initial approaches to the Local Authority were disappointing with their belief that the district should remain solely for commercial and industrial use in spite of the many empty and derelict properties. This attitude was reinforced by the Unitary Development Plan, and the planners believed that the poor quality of the building stock was advantageous and actually made it attractive to start up and marginal businesses.

Despite the authority’s initial views, there was a body of anecdotal evidence that businesses were moving out of the area because it was unsuitable for modern business needs due to the steep topography, narrow streets, unsuitable buildings and growing social problems connected with street prostitution and drug abuse.

Studies were undertaken with a wide variety of stakeholders, including businesses, property owners, residents, potential investors, the universities, police and social services. These pointed to the planners stance and the UDP being out of date and unsustainable and with this in mind a purchase was agreed with Stephenson Blake.

Over the following year further studies and consultations were carried out and a scheme devised that was 100% residential which included the restoration of the existing high quality buildings, along with carefully identified demolition and site clearance to permit new build construction on the brownfield site. Liaison with local police commanders showed that there was an appetite to deal with local social issues and that new residents coming into the area would provide a welcome catalyst to would inject new life into the area and assist in displacing street prostitution and drug use.

After a number of iterations to perfect the  the final scheme was devised in three main phases to be called Original Impact, Minor Impact and Major Impact. Why Impact? The project title is more than a dreamed up marketing name. Impact was chosen because it is one of the owned by the Stephenson Blake type foundry and this famous font can be found on every PC.

Minor Impact is new build student accommodation of 50 apartments comprising 254 cluster bedrooms over nine storeys. Each room is fully en-suite and part of a cluster unit of average five beds.

Major Impact is an eight storey private apartment building with 106 units. The unusual design creates an internal street with a full height glazed atrium above. Each apartment is accessed by a network of bridges spanning across the atrium, giving dual aspect to each residence and creating a unique common space interior. Because of the regenerative nature of the scheme there was no social housing provision negotiated by the local authority. 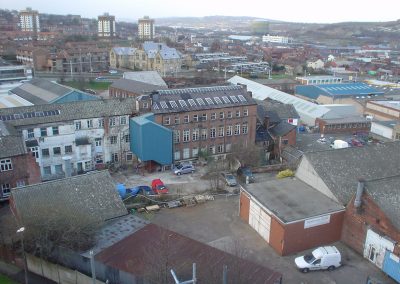