Castle Works was purchased unconditionally from the resident engineering business.

Although residential use was contrary to the UDP in place at the time and the planning authority was extremely reluctant to permit anything other than starter business units, a detailed case was built which involved extensive local consultation which demonstrated that there was negligible demand for the low-grade business units that was typical in the area.

With existing businesses moving out to more suitable and more easily accessible sites on flat ground the district had developed social problems with substance abuse and prostitution. Support from residents in nearby social housing and local police commanders underlined that the regenerative benefits of student accommodation would be the catalyst to turning around the fortunes of the area.

The scheme utilised the existing footprint of Castle Works and retained three two and three storey sides to the central courtyard. A later addition to the front elevation was removed and new structure formed the rebuilt section as well as extending the property upwards to four and five storeys.

Eventually the local authority were convinced of the merits of the scheme and the wider benefits to the district and agreed that the proposal should be approved. Planning permission was granted by committee. 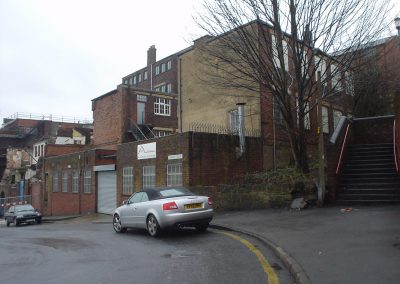