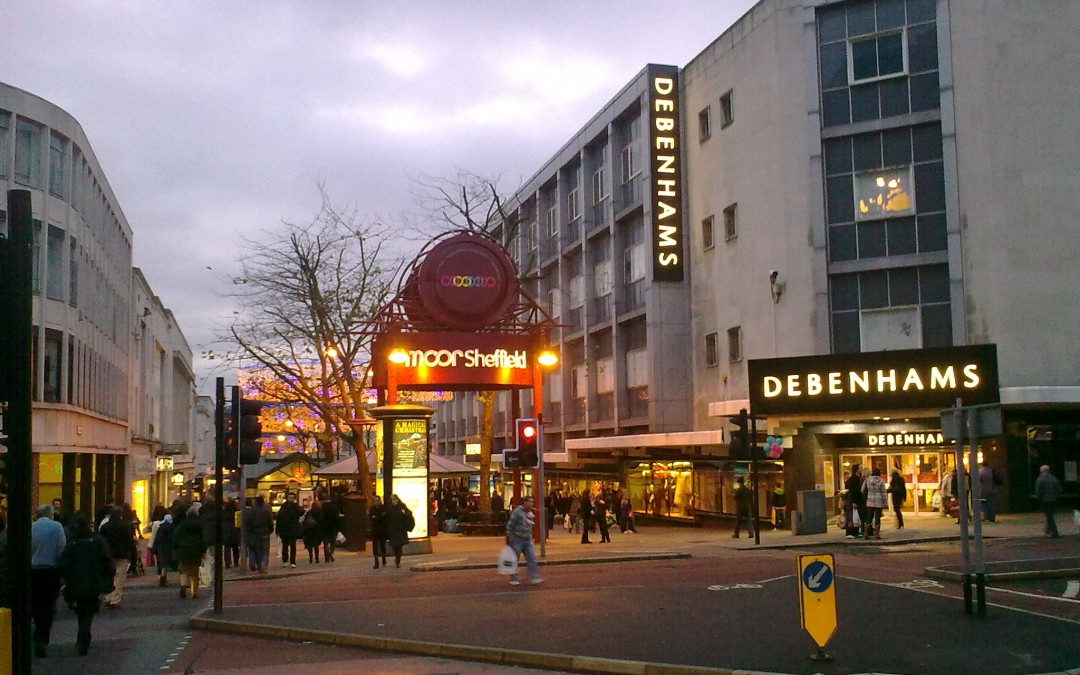 Sheffield has developed over the years to reach out from the confluence of the River’s Don and Sheaf next to the long gone Sheffield Castle. While this in itself isn’t unusual in British town morphology, what is different in Sheffield when compared to most other large cities, is that the retail area of the city has a single principal shopping street stretching for over a mile.

In the 1970’s the Government’s Manpower Services Commission decided to move a large part of its functions to Sheffield by opening the Moorfoot Building which effectively cut the southern end of the Moor off from London Road and Ecclesall Road, turning The Moor into a single aspect area. The consequences of this action proved disastrous in later years.

As the final leg of this ribbon, The Moor has suffered in recent years as the higher quality retail left in the 80’s and never really came back. Subsequent re-style, re-brand and landscaping efforts have proved ineffective.

Since then the offer has become increasingly down-market, the larger retailers including BHS, Marks and Spencer, Habitat, Dixons, Hamleys, Co-Op have left leaving only an out of date Debenhams and the wonderful if a little old fashioned Atkinson’s department store, still owned by the Atkinson family. Neither of these large stores appear to be able to fulfil their potential on the Moor.

The erection of outdoor market stalls in the 1990’s appeared to seal the coffin lid tight shut. That action ensured that pedestrian sight and desire lines were permanently blocked.both physically and psychologically. The stalls have ad-hoc occupation that benefits neither the stall holders, consumers or the built / retail environment.

A gradual but inexorable reduction of shopper numbers caused chain store retailers to concentrate on their other outlets in Sheffield in more viable locations such as Fargate, causing their leases to be given up and the shops to become vacant. Even McDonald’s moved out from their prime position. Many of these were later occupied by discount retailers, many of whom were short term occupiers with little interest in their long term environment. This process became iterative until large numbers retail units became long-term vacant.

Deutsche Bank bought up a large amount of the Moor estate from Sheffield City Council, making them the largest landholder in front of Atkinson’s and Debenhams. DB later bought RREEF and created £750m  plans to regenerate their landholding in Sheffield through that vehicle.

In recent months some spot demolition has been taking place resulting in further deterioration of the environment.

A central part of the proposal emerged to relocate the Market from Castle Market to a new, purpose built structure on the eastern side of The Moor.  At first glance this seems like a great idea. It frees up valuable land in the northern sector of the city centre for commercial development and gives an opportunity to reveal what remains of Sheffield Castle – a popular move among Sheffielders.

However, the recent recession has put paid to any thoughts of a quick turnaround for the Castle district which has suffered similar retail degradation to The Moor in recent years. Removing the markets would create further downward pressure on the Waingate and Angel Street area, resulting in what is now a downmarket, but thriving district to fracture beyond economic repair.

Market traders are rightly concerned that the move to the new market hall will wipe out their business base built up over many years in the Castle Market, and the design for new market hall has received much criticism, especially for the treatment at the rear.

An alternative proposal for The Moor would be a radical redistribution of existing occupiers to the Castlegate area to reoccupy the large footprint retail buildings once occupied by major retailers, releasing The Moor for a new people centric destination district with a mix of uses including shopping, entertainment, office, bar and restaurant.

A short summary of primary actions: